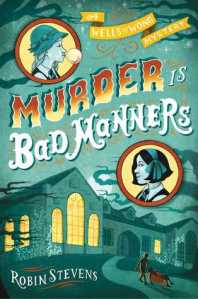 I picked this up looking for a ‘cozy mystery-style’ story for middle grade readers. If I consider it strictly in that sense Murder is Bad Manners has a lot of those types of elements and does a good job structurally guiding a younger middle-grade reader through the process of finding clues and using deductive reasoning to organize them into a hypothesis.

The setting is a girls’ boarding school in 1930’s England. Our main characters are Daisy Wells (blond-haired, blue-eyed English aristocrat) and Hazel Wong (daughter of a Hong Kong banker, Chinese, slightly heavier than average). Together the girls form their own Detective Agency with Daisy as president and Hazel as secretary–mirroring the Sherlock Holmes/Dr. Watson dynamic. When Hazel accidentally discovers the dead body of one of their teachers, the girls have their first case. They collect clues, follow leads and ultimately uncover the culprit.

The pacing is even and both Daisy and Hazel are multi-layered characters that hold the potential for growth and insight. The setting is very well established–and from that setting arises my difficulty with the book. The author has chosen to have the environment of the English boarding school (populated by daughters of reasonably to exorbitantly wealthy parents) remain closer to the norm of the time, which is to say–not particularly tolerant or insightful regarding multiculturalism. This is a problem when one of the main characters–the narrator of the story–is Asian. Other students and teachers make ignorant and insulting comments to Hazel about her heritage and her body size that are not directly related to the central mystery of the story, but would not be surprising to hear at that time and place. Daisy’s character is thoroughly manipulative and unlikable–again, not necessarily a deal-breaker for me–while Hazel’s character is meek and submissive.

All the choices the author makes about character, setting and action are undeniably valid artistic and structural choices for the story. SO…if this kind of ignorance is accurately represented as ‘normal’ in the 1930’s–and we KNOW it’s ignorant and inappropriate NOW (or specifically in 2015 when this was written)–my personal feeling is that the author has a fiduciary responsibility to young readers to address it in some way. This could be as simple as having at least one character who is nontraditional in her beliefs and behavior (and we know they existed) and can represent a more inclusive view of individuals. Even a foreword by the author addressing the fact that she will use attitudes and behaviors that were overlooked at the time despite being grossly inappropriate. The author makes the choice not to do any of these things.

Another problem is that Hazel is not mistreated only because of her Asian heritage; the author has also made her slightly heavier than the other girls which brings with it a lot of body-shaming from other students and teachers. Daisy’s treatment of Hazel is dismissive and sometimes outright cruel. The decision to heap ALL of these complications on Hazel’s character alone is perplexing to me in the context of the story. I think there is a deeper layer to Hazel that she begins to discover in this book…and maybe she addresses others’ attitudes toward her later in the series. Her character absolutely has the ability to do so. I don’t know, as I have not read the other books in this series. I remind myself, however, that I am a white woman reading this and if it made me uncomfortable, then how is a young Asian girl looking to find characters with whom to identify, reading this story going to feel about the way is Hazel is portrayed and treated?

In the end, although Murder is Bad Manners is structurally sound, I cannot in good conscience recommend it to young readers because of the way Hazel’s character is designed and treated in the book. My search for good middle-grade mystery series with girls as the lead characters continues!  If you are looking for a Sherlock Holmes-type of mystery with a strong young female protagonist I highly recommend the Enola Holmes series by Nancy Springer! The younger sister of Sherlock and Mycroft Holmes, Enola has a mind of her own and defiantly bucks the traditional female role in 19th century English society. The first book is The Case of the Missing Marquess.